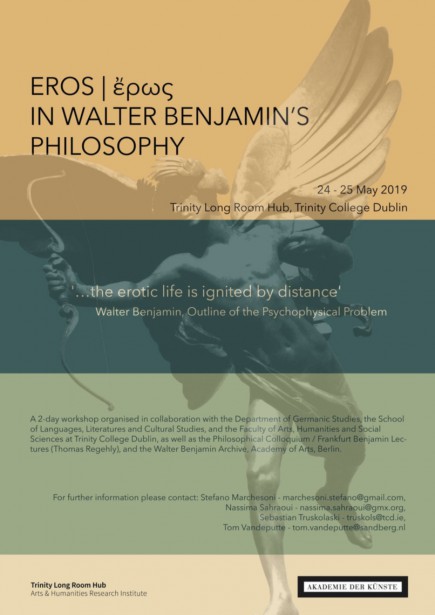 Although Walter Benjamin’s references to the concept and praxis of eros are sporadic, he appears to be acutely concerned with questions of love and desire from early on. In particular, his writings are deeply engaged with the concept of ἔρως as it appears in Plato’s Symposium, where it is defined as a kind of super-medium in which everything communicates with everything. Benjamin, however, dislocates the concept of eros. In his essay on the “demonic” figure of Karl Kraus, for instance, he attempts to overcome the ambiguous entanglement of spirit and the daimon—or, more precisely, the ‘demonic nature’ of sexuality—by exploring the intimate relationship between eros and language.

In later years, especially in the pivotal essay on Goethe’s Elective Affinities, Benjamin approaches the question of eros from different perspectives, namely that of love and institutionalised bonds: on the one hand, he questions the ethical meaning of marriage, while, on the other, he outlines his own anthropological concept of love through a critical reading of Ludwig Klages’ Vom kosmogonischen Eros (1922). Benjamin thus introduces a characteristic tension between a notion of pure love and its finite, experiential iteration.

Finally, in his later writings, Benjamin examines love from a historical perspective. In the Arcades Project as well as in his Baudelaire essay, we find some scattered reflections in which the relationship between eros and aura becomes perspicuous, since both are linked to the interplay of nearness and distance.

During our two-day workshop, we will draw on the manifold meanings of the concept of eros in Benjamin’s work. The event is the sixth in a series of events dealing, directly or indirectly, with Benjamin’s concept of Aktualität. The workshop will be organised around close readings of selected text passages, which allow connections to be drawn between Benjamin’s reflections on philosophy, aesthetics, language, sexuality, and history. Since the workshop revolves around intensive reading sessions, some prior knowledge of the relevant texts is strongly encouraged. Bilingual, German-English copies of the texts will be made available. To facilitate the discussion, the number of participants for this workshop is limited.

This year we will be joined by ESTHER LESLIE (Birkbeck, University of London), who will give a keynote lecture on Eros in Walter Benjamin’s philosophy.

If you are interested in participating, please send a message and a brief biographical note to the organisers before 1 March, 2019.

In collaboration with the Department of Germanic Studies, the School of Languages, Literatures and Cultural Studies, and the Faculty of Arts, Humanities and Social Sciences at Trinity College Dublin, as well as the Philosophical Colloquium / Frankfurt Benjamin Lectures (Thomas Regehly), and the Walter Benjamin Archive, Academy of Arts, Berlin.