Franke Institute for the Humanities, Chicago 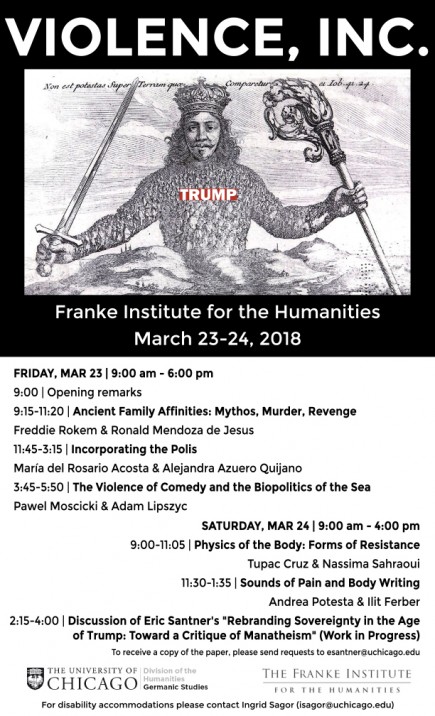 Violence is exerted on – and by – bodies and/or embodied minds. It forms an unavoidable part of human activity, both individual and collective. On the receiving end, violence inevitably shapes and/or distorts human bodies, as well as their social and political aggregations. It can be disciplinary, formative, liberating or purely destructive a force. The relations between embodied violence and the realm of meaning can be most diverse: it can operate within the realm as the symbolic violence or it can act as a force which disrupts the meaningful. The complex cluster of problems raised by the embodied nature of violence can be (and has been) coped with from various theoretical perspectives, from the Hegelian vision of the struggle for recognition to Freudian and post-Freudian analysis of aggression and biopolitical studies of Foucault and Agamben. Most urgent contemporary issues, such as the problem of torture and the refugee crisis, form an unavoidable context of these reflection today. Thus, in our workshop we would like to discuss the formative, distortive, oppressive and emancipatory nature of violence-as-embodied, as exerted on and by individual and collective bodies. We shall test a variety of philosophical approaches as well as discuss possible forms of literary representations of violence incorporated.

The workshop is the fourth part of a series of gatherings that fall under the epigraph of „Violence in Philosophy and Literature“. These gatherings were particularly devoted to discuss the question of ‚language‘ (Tel Aviv University), of ’space‘ (Polish Academy of Sciences, Warsaw), and that of ‚writing‘ (ZfL Berlin) in both fields. As in the previous years, the discussion of the individual papers will be followed by a close reading and discussion of a single literary text and a film screening, which will catalyze the exchange on violence and incorporation.